A Christian Plea Per Matthew 18: Behold Now Behemoth and Genesis The Movie

All images used via the Fair Use Act

UPDATE, 11/20/2015: People on Facebook have begun to weigh in, and so far the majority of the small number offering opinions agrees with our view about the unlikely similarities between Eric Hovind's "Genesis The Movie" (2015) and our "Behold Now Behemoth" (2008). If you also agree with how we feel about this and want to witness on our behalf as commanded in Matthew 18, we suggest that you do so on Eric Hovind's Facebook page so he can respond and that of his movie, Genesis The Movie, so that account can respond. Thank you so much for your growing moral support. We'll keep you continually posted. God Bless.

This is long but please read. CLICK ON EACH IMAGE IF YOU WANT TO SEE IT FULL SCREEN.

You may have seen me raise this question before: "Why Does Eric Hovind's "Genesis the Movie" look so much like my "Behold Now Behemoth"?  Yes, this matter concerns my own interests, but  that doesn't cheapen my motives given the circumstances, and I'm sure you'll agree with that, because there is also a possible issue of plain old-fashioned right and wrong, here. 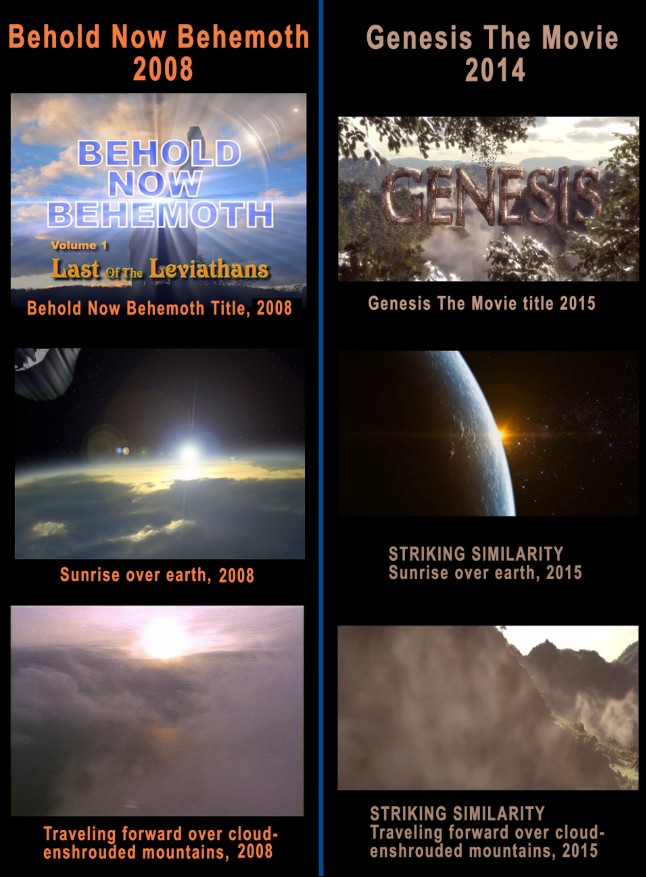 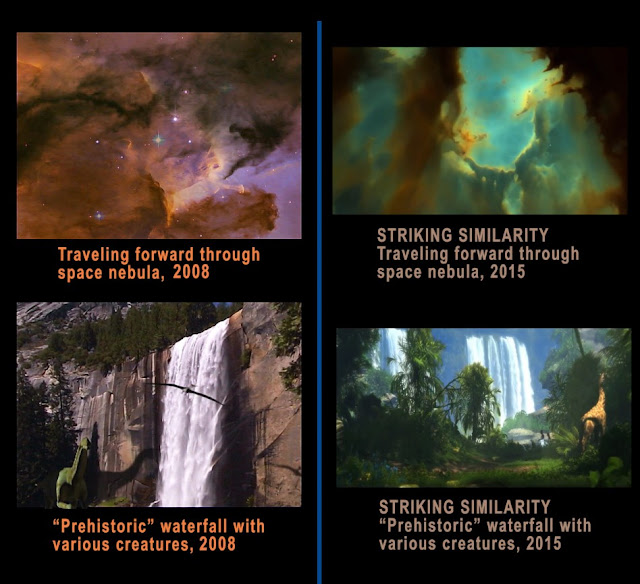 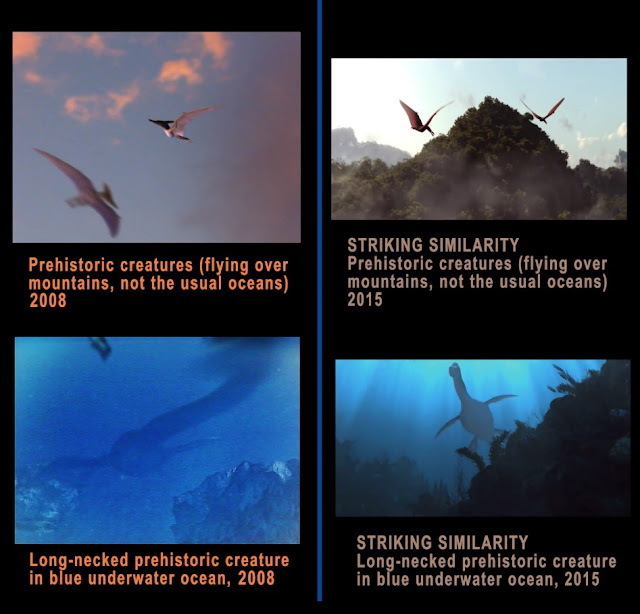 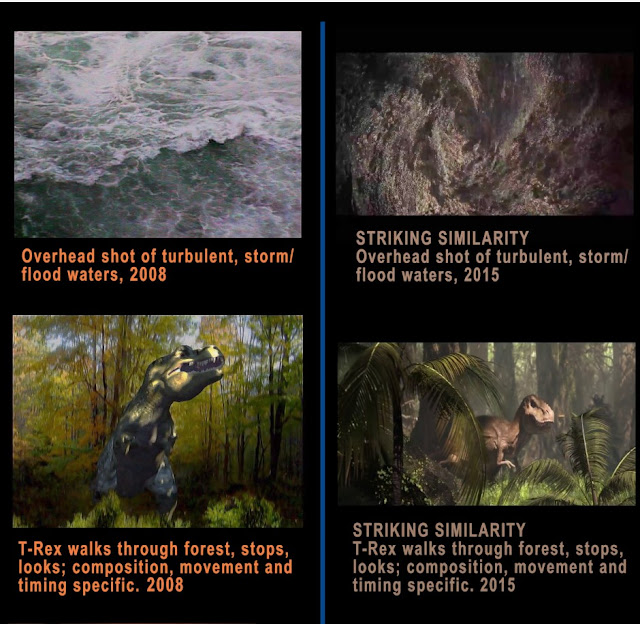 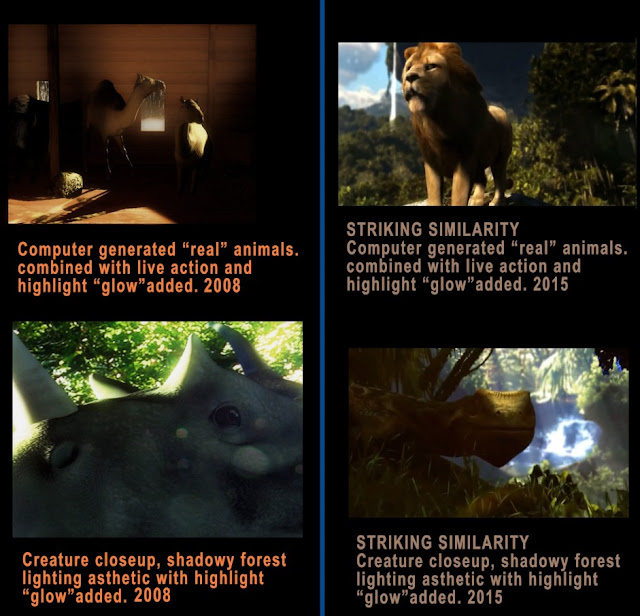 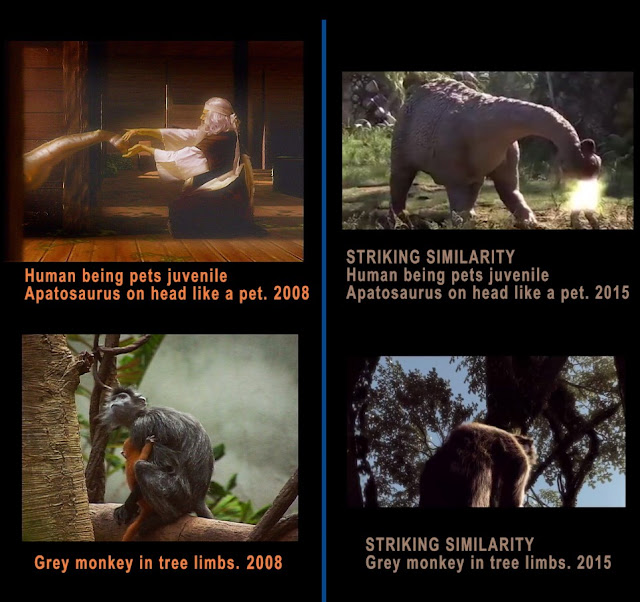 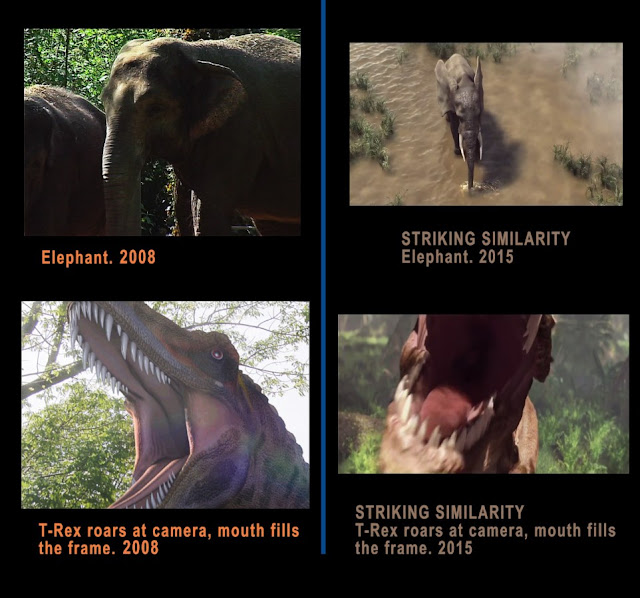 It's funny that my name is David, insomuch as this is, IMO, a true David and Goliath situation. On the one hand is the independent producer, myself, with his modest Behold Now Behemoth, well-received in 2008, and the other is a mega-money-ministry which apparently brings in millions of dollars a year and has raised nearly half a million dollars for.....? Well, how you define what they are trying to produce is really the issue.

I'd not heard of Genesis the Movie before starting the crowdfunding for volumes 2 and 3 of Behemoth. Unlike Eric Hovind, for whom Creationism is apparently his daily business and bread-and-butter, I have been restricted by time and other constraints. But it was time for Behemoth volumes 2 and 3. Then the crowdfunding goes nowhere for once-well-received Behemoth. Why? In my opinion this is the answer: a nearly identical video being launched with well-funded publicity which has already raised nearly half a million dollars has basically sucked the air - and the capital -out of Behemoth. Sour grapes? No. It might be if it were not for the fact that their video/movie appears in my opinion to be so identical to Behemoth has to be almost an unauthorized tribute - and perhaps even makes Behemoth to the casual viewer look like a cheap copy of Genesis and that hurts my interests and the interests of all Creationists for whom a fair playing field is always at a premium.

If it is what it looks like, it is also plain just not right.

I brought up this question directly on Hovind's Facebook page and in an interesting response they asked me to observe Matthew 18 and discuss this with them in private. When Hovind's account which gets signed "The Team" (so I have no idea with whom I was communicating, although I have the screenshots) reached out in a private message, I responded. They wanted me to email Eric Hovind - but failed or refused to give me the email address in the private message - so he could tell me "personally" why the two films are in no way connected to one another. I told them I was not born yesterday and that if expecting me top believe that the two films were not in any way connected is what they were after, they were wasting our time, but I wanted to and was very willing to communicate with Hovind in private on the larger issue.

Well, so much for Matthew 18: "Goliath" Hovind removed all my and other comments from the thread in question,  blocked my ability to comment on the page and blocked any more direct messages - direct messages for which they asked and initiated. So the question remains: "WHY DOES THEIR NEW GENESIS THE MOVIE LOOK SO MUCH LIKE MY SLIGHTLY OLDER BEHOLD NOW BEHEMOTH"? This is a question Hovind appears not to want to answer publicly and now not even privately.

Since Hovind has suspended all communication with me - which his account initially requested - I believe I, and in my opinion all of the Flock, have the obligation to follow Matthew 18: we tried to do it privately, but Hovind will not hear us. So to follow Matthew 18 which Hovind's account recommended on this very issue, the next step in following Matthew 18 is that we need to talk to Hovind about it as a group, and if that does not work, announce this problem to the world.

"Moreover if thy brother shall trespass against thee, go and tell him his fault between thee and him alone: if he shall hear thee, thou hast gained thy brother.  But if he will not hear thee, then take with thee one or two more, that in the mouth of two or three witnesses every word may be established. And if he shall neglect to hear them, tell it unto the church: but if he neglect to hear the church, let him be unto thee as an heathen man and a publican". 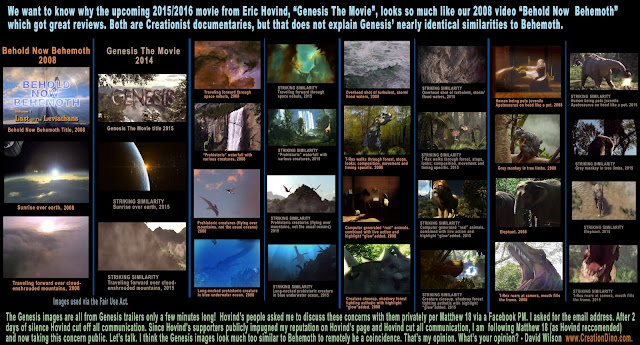 Please click on the image for full size, save and share this graphic and politely inquire of Hovind and others involved in Genesis the Movie - as well as your friends and acquaintances on Facebook - how such an overwhelming preponderance of similarities could have taken place by accident. And please state your opinions here, too, regardless of who they favor - I feel genuinely righteous on this issue.
Remember, additionally, what we are called upon to do in Deuteronomy 13:14:

"Then shalt thou enquire, and make search, and ask diligently; and, behold, if it be truth, and the thing certain, that such abomination is wrought among you;"

Please don't be shy: please post this wherever Genesis The Movie is being discussed, ask Hovind and those around him about this directly per Matthew 18  and investigate per , Deuteronomy 13:14 and say what God tells you in your mind and heart to be true. Our Lord Jesus has said it on all such matters.

Thank you for your patience and your anticipated social media moral support, per Matthew and Deuteronomy. 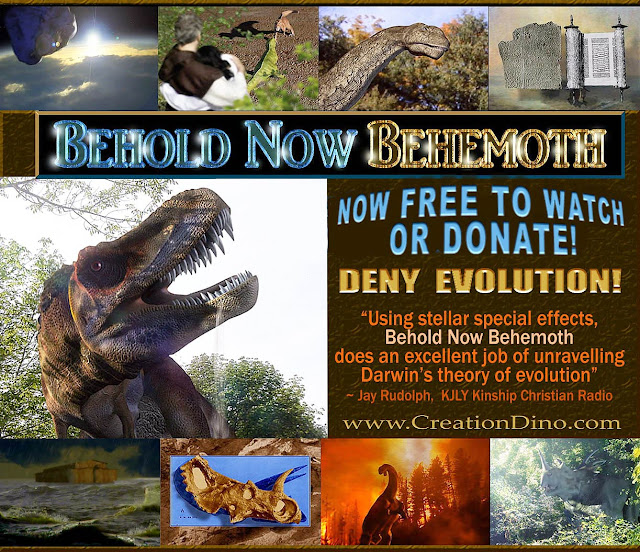 If you like what you see and read on CreationDino, please help us continue our work as well as additional installments of the video Behold Now Behemoth by giving a "Christian Payment Offering" for the dollar amount of your choice with the dropdown menu on the Paypal button on the upper right hand side of the screen for what you read and watch on CreationDino. We could really use the help right about now.
Posted by Unknown at 4:23 PM