.... WITH ORIGINAL INFORMATION AND MATH NOT FOUND ELSEWHERE: MOON NO MORE THAN 60,000 YEARS OLD. BE AMAZED!

First, what is "dust on the moon?" Put simply but accurately, there are large clouds of dust that float directly in the orbit of the earth as it (and we) orbit(s) the sun.  Year in and year out, the earth plows through these dust clouds. On earth, "larger", tiny pebble-sized fragments burn up in the atmosphere as "meteor showers" and the balance of the dust is otherwise taken care of by earth's atmosphere and atmospherics. That's true. That's all meteor showers are; tiny bits of grit which get hit by our atmosphere at tremendous speed as the earth makes its yearly orbit around the sun.

It's all very different on the moon, which gets dragged with earth through these dust clouds as the moon orbits the earth. There is no atmosphere on the moon, no water, nothing to destroy or absorb the dust. So the dust simply settles on the surface of the moon, building up year after year - and that is the point: for the moon to be eons old, there should have been many feet of dust encountered when Humankind landed on the moon, instead of the 2.4 inches found. But that idea was beaten back decades ago by secular scientists, hammering square theoretical pegs into round holes and relying on the fact of no physical evidence to contradict their wishful thinking and obviously incorrectly and seemingly arbitrarily lowering of the estimate of the amount of dust settling on the moon, determined so were they, it would seem, that the earth be 4 billion years old regardless of the evidence and no God be involved in the celestial mechanics. You can really irk some secular scientists pretty badly by even mentioning the word God, and that is both sad and disturbing. But I digress.

Very quietly, as of 2013, Dust on the Moon became a huge issue again. Why? Because as reported by places like the very extremely secular Physics.org, a former NASA scientist, Australian Professor Brian O'Brien (CreationDino loves the name), when hearing that NASA had lost information regarding dust accumulation,  offered his own backup tapes of that very experiment device, the experiment device he invented and which was taken by NASA to the moon, piggybacking on the missions. The result of the rediscovered data is a big "uh-oh" for Old-Time, Old-Earthers.

It seems that the rediscovered tapes show that orbital dust on the moon collects really fast in the geologic time-frame of things. 0.04 iches per 1,000 years might not sound like a lot, but Dr Walter Brown calculates that a moon 4.5 billions of years old should have 2,000 feet of dust on the moon, not the 2.4 inches which met NASA astronauts. NASA itself has had to admit that the dust accumulates at least 10 times faster than originally calculated. Obviously, the implication is a moon thousands, not billions, of years old.

That number of 2,000 feet of dust on the moon is still a tad too hypothetical for totally anal-retentive CreationDino, so CreationDino did a few quick calculations, reversing the emphasis from feet to time, and the forecast is bright and sunny for Young Earth Creationists and dark and gloomy for often antagonistic Old-Time, Old Earthers. Using available NASA averages  of  2.4 inches  of dust currently on the moon and a newly rediscovered NASA-calculated rate of 0.04 inches of dust per 1,000 years, we get a moon approximately no older than 60,000 years old, or 0.0013333 percent of the Old-Time, Old-Earther's estimation of a moon 4.5 billion years old.

You can double check CreationDino's calculations easily with a home calculator, it isn't complicated to double-check: 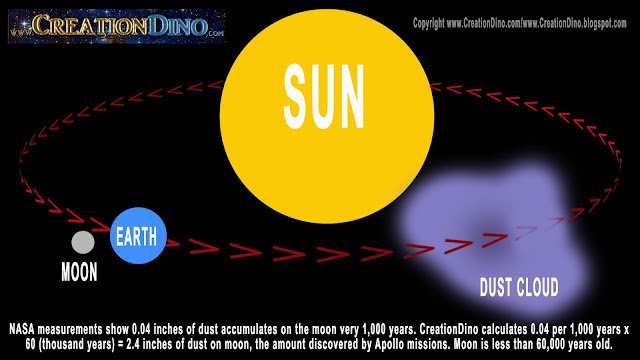 But it gets even sunnier for Young Earth Creationists. Much sunnier. Unless those dust clouds continually replenish their volume of dust, which logically is impossible - there is no observed mechanism for it -  they must be significantly losing volume with each broom-like sweep of the dust as the earth and moon plow through them and pick up enough to give us a good few meteor shows a year. How can the amount of dust on the moon remain constant unless the dust clouds are not losing volume, as logic demands they must? Well, the dust clouds obviously can't and haven't remained constant, that's literally impossible. This means that the dust must be accumulating on the moon much more slowly now than thousands of years ago, as the volume of dust in the clouds decreases over time and there is less and less dust within the cloud which has not already been swept up on the moon per orbit through the clouds.  With a moon now definitely collecting dust for no more than 60,000 years according to CreationDino's approximate but totally accurate math, this means that the moon, collecting dust now at a lesser rate than must have done in years past, the moon (and by strong implication, earth) could indeed very logically fall within an age of 6,000 - 10,000 Biblical years.

Probably not-so-coincidentally, 6,000 years is  about the same amount of time we know for sure that humans have been keeping recorded history (where did those supposed 990,000 years out of 1 million of supposed human history go, anyway?). It's also the same amount of time the begats mentioned in the bible work out in terms of human existence on earth, around 6,000 - 10,000 years.

To eliminate anticipated, elsewhere-already-offered rationalizations for the small amount of dust on the moon from sometimes-seeming Creationist-hating seculars (warning to average readers, this paragraph gets technical), CreationDino hastens to add that electron-bouncing solar winds (charged particles streaming from the sun), in an environment seen by human eyes and all detectors for decades to be motionless, on the moon, being able to brush 2,000 feet of dust into a uniform layer onto the dark side of the moon (where, impossibly, it would not be "blown back" but rather remain forever, which is not how solar winds work), adding to the 2,000 feet presumably collected on the dark side into a pile 4,000 feet high onto the dark side of the moon is a pretty stupid idea. Also, the math doesn't lie, so for those who will say that there must have been some kind of impact that created the dust clouds in the last 60,000 years, CreationDino hastens also to remind those Old-Earth wishful thinkers that for that to be true, whatever hypothetical impact they would like to offer would have had to result in the absolute, total pulverization into dust of whatever two rocky bodies impacted with no big pieces left to strike the earth like a storm of doomsday asteroids as the earth plowed into the areas of the hypothetical then-recent impact in its orbit around the sun where now reside dust clouds. Sure there are craters on the earth. But the same secular scientists who say that the universe is 4.5 billion years old also say that the craters on the earth, as demands be formed by large debris impacting the earth from a hypothetical dust-cloud-causing collision,  are hundreds of millions  of years old at least.   Oops. So for dust on the moon to have been accumulated by a collision of bodies to form  2.4 inches, with a rate of dust-fall at 0.04 inches per 1,000 years, by that reckoning, easily-punked "radiometric dating" which is used to supposedly measure the age of the earth is totally worthless, also. Uh-oh. Someone hand the Creationist-haters a large, economy-sized box of hankys. And no crater evidence of an apocalypse-causing rain of space  collision debris on earth in the last 60,000 years is only the start of the trouble unleashed by a clearly impossible theory of the impact of space bodies within the orbital path of the earth, hypothetically causing the dust clouds, without which the moon itself can only be at most 60,000 years old. Also, the idea of the shallow depth of the dust being a localized phenomena bucks the averages to say the least - there is no wind on the moon and no umbrellas. The observed evidence essentially substantiates a scattered, more or less uniform, coating of dust between 2 - 3 inches. Various NASA astronauts did not land in a few unique dust accumulation anomalies all matching each other at 2-3 inches, they landed in a few areas of dust accumulation averages of between 2-3 inches.

As you can see, the rate of accumulation of dust on the moon, like a row of dominoes, kicks the stool out from under a great many assumptions about the age of the earth and moon and makes a huge contribution to the certitude of a Young Earth.

Many creationist sites are still not up to speed on the rediscovered data and appear to be afraid, perhaps rightfully, of hopelessly outdated NASA hypotheses made before the original, correct actual data was  rediscovered in 2013. Correct them. The moon must be "Creationist Young" absolutely according not to theory, but rock-solid evidence, if you'll pardon the expression - somewhere generally in the same age as the Bible infers of the earth.

Extrapolation is a necessary aspect of forming a secular theory and CreationDino has come to its Creationist belief through secular investigation, not Faith. To establish a secular theory one must extrapolate, to draw a conclusion from a series of facts. Right now secular science is not making extrapolations from facts, but instead making extrapolations from collections of theories based on partial facts used to explain otherwise unexplained phenomena, and that's just horrible science.  As of this writing, and presumably long into the future, the numbers, understood as immutable fact, are supporting a Young Earth as inferred in the Bible. Dust accumulation on  the moon, 6,000 years of recorded human history and other proof-positives, are coinciding with astounding approximate uniformity across the board to the numbers inferred in the Bible of a 6,000 - 10,000 year old Earth.

Like the dust on the moon, the evidence of a Young, Bible-confirming Earth is piling up faster than expected. Rejoice. That's great news.

If you like what you see and read on CreationDino, please help us continue our work as well as additional installments of the video Behold Now Behemoth by giving a "Christian Payment Offering" for the dollar amount of your choice with the dropdown menu on the Paypal button on the upper right hand side of the screen for what you read and watch on CreationDino. We could really use the help right about now.
Posted by Unknown at 3:34 PM