Scientific Concepts; Why A Literal Interpretation Of The Bible Makes Perfect Sense

I am amazed at the lack of imagination of people who say the Bible accounts are "impossible". Any science fiction geek worth his rubber Spock ears will be able to rattle off intriguing scientifically possible terms such as "transmutation of matter", "genetic engineering", "severe gravity-caused time distortion" / "time warp", "hyperspace" and basically those alone would cover everything that happens in scripture as literal fact.

The rod that (transmutes) into a snake, The woman created (potentially from the genetic material and countless other options) from Adam's rib; Severe time distortion during the 6 "days" of creation (the incomprehensible gravitational forces during the creation of the universe would play incalculable massive havoc with time), the animals that arrived in pairs at the ark (easily explained via genetic engineering and countless other scientific possibilities), Time stopping for Joshua appears to deny the theory of relativity but being temporarily taken into an inter-dimensional state of being could easily explain that since most astrophysicists agree that time and space could easily be operating under entirely different physical laws in different dimensions); the great flood would be too, too easy, of course.

On an even deeper level, all matter is comprised of energy that vibrates at different frequencies. Any being capable of extremely nuanced modification of those frequencies could, presumably instantly,  mold any and all matter like putty in an infinite number of ways and on an infinite scale, a concept of control by God usually stupidly mocked by the mainstream science atheists as "impossible" even though the concept falls well within what is categorically scientifically accepted of the nature of physical matter.

Most secular science types are the first to say, "Magic is only science misunderstood." It is bewildering that when it comes to the Bible they lose their grasp of this entirely sensible intellectual concept.  Remember what Einstein said: "Imagination is more important than knowledge. Knowledge is limited, imagination encircles the world." But just put the words God and Jesus into the mix and these otherwise forward-thinking intellectuals go dumb as a post and start measuring all there is according to "A Charlie Brown Christmas". Pathetic.

Absolutely everything described in the Old and New Testament could be explained with the same future science concepts which esteemed writers such as Dr. Isaac Asimov apply to mere future humankind, so otherwise lovingly embraced by the very people who cite scripture as "Fairy Tales". That's a numb-numbing degree of pathetic confusion on the part of pro-science Christian-haters. As Dr. Steven Hawking, himself an atheist, ironically, wrote, "No matter how thorough our observation of the present, the (unobserved) past, like the future, is indefinite and exists only as a spectrum of possibilities."

There is absolutely nothing in the Old and New Testaments that can not be fairly easily assumed as true and accurate by very simply applying a little good old-fashioned futurist conceptualization. The Christian-haters and creationist-haters would do well to stop being such dim-witted hypocrites and try it, sometime. 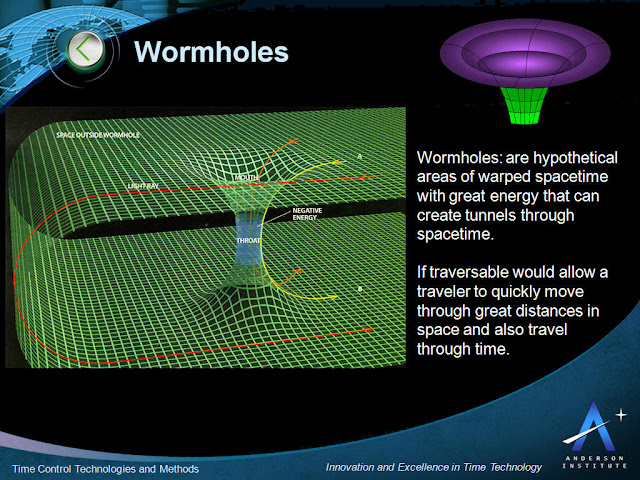 Image used via the Fair Use Act.
One of many actual or hypothetical spacetime phenomena which are readily accepted by the mainstream scientific community which could in part explain the 'magic" described in the Bible, a point of debate lost when secular scientists go into "hate mode" and turn off their brains.
If you like what you see and read on CreationDino, please help us continue our work as well as additional installments of the video Behold Now Behemoth by giving a "Christian Payment Offering" for the dollar amount of your choice with the dropdown menu on the Paypal button on the upper right hand side of the screen for what you read and watch on CreationDino. We could really use the help right about now.