... And Why 6-Day Creation is Absolutely Scientifically Possible According To The Laws Of Known Science.

How could God have created all we know in 6 days if all we know of science demands billions of years? It's a now-old question.

The answer resides in quantum physics, and while I am not the first one to posit quantum physics as the answer, I cannot find another answer which is the same as what is being posted here, so for fun, I will call it Wilson's Scientific Law of Biblical 6-Day Creation because I have started having a pretty good time of late naming my own ideas after myself, and these points of debate appear to be shutting down the malicious atheists cold, and that's a good thing, so why not?

Most reference sites that mention quantum physics in relation to Creation either cite the fact that quantum process are often different in reality depending on how they are observed (one of those scientific mind-benders) or they launch into alarmingly over-complicated stream-of-consciousness such as this somewhat unnervingly random explanation by Ken Ham which is off in a seeming million directions (perhaps in trying to describe quantum physics, like a poet he was also trying to write his points in the form of quantum physics, so it was filled with endless subjective paradoxes for the reader which appears to slow time to a crawl..... who knows?)

This will be now be explained quickly and easily so anyone can understand it, because there is no point writing about something if it is only understood by a few. Read it and when the question arises, answer it, and together, change the world.

What science knows: All matter is comprised of energy, and all "objects" in the universe are simply areas of energy vibrating at different frequencies. the edge at which one area of energy is vibrating at one frequency from another is what distinguishes one object from another.  Science also knows that mass causes gravity, and the larger the object, the more gravity it produces, and gravity distorts time.

This gets heady, but as you read here in the previous post,  any being capable of manipulating in a very nuanced fashion the frequencies of energy vibration literally has control over all creation, and could (or can) mold all energy into whatever form of matter that Being wished, presumably almost instantly. That is God-like power of Creation in the literal sense , scientifically qualified, a fact that the mainstream scientific community seems to have missed for decades(see also, this on CreationDino). There is no magic or superstition about it, and it is impossible to refute, so we must assume that to be a categorical fact.

Here we now get to Wilson's Scientific Law of Biblical 6-Day Creation and I am happy to tell you that Einstein would agree with at least part of it: it isn't over-complicated. It's nice and simple, but not too simple. In a nutshell, it goes like this:

Wilson's Scientific Law of Biblical 6-Day Creation: Energy = Matter, Matter causes Gravity, Gravity distorts Time. Therefore, any being capable of creating matter from energy in any form,  via energy frequency manipulation could, by doing so on a vast scale and/or nuanced manner, also manipulate time in exactly the same fashion, presumably almost effortlessly. This cannot be disputed. It is a scientific fact. And there is your 6-Day Creation, qualified scientifically regardless of how anyone decides to measure a 'day".

Nice and clean and simple. None of this, "it depends on how the phenomena is observed", or "were there clocks when God made the universe?" (which is not a scientific question, but really a philosophical one). You now have a totally scientific hypothesis which qualifies the possibility of 6-Day Creation in a way which does not require interpretation via objectivity, subjectivity, philosophy or assumptions of future discoveries as yet unknown by science.

One easily anticipates atheists engaging in non sequitur by asking, supposedly rhetorically, "Why would God choose 6 days?' and that is not a point of science. To question the motivations of God is a point of philosophy, although it is easy to postulate that intending to explain all this in simple terms to His creations, He merely did it all in what would otherwise be measured in 6 24-hours of earth rotation so to keep it simple. You have doubtless of explained things very simply to children in ways that while honest, did not no into detail that the children could not possibly understand, though they would when they grew up. I submit that we see the same general approach by God in the Bible. The communication style makes perfect sense with which anyone can relate.

And for the time being, that's all that matters. 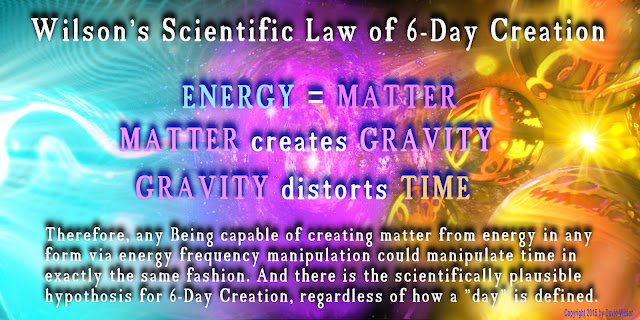 If you like what you see and read on CreationDino, please help us continue our work as well as additional installments of the video Behold Now Behemoth by giving a "Christian Payment Offering" for the dollar amount of your choice with the dropdown menu on the Paypal button on the upper right hand side of the screen for what you read and watch on CreationDino. We could really use the help right about now.
Posted by Unknown at 11:54 AM