THE ATHEIST THEATER OF THE ABSURD 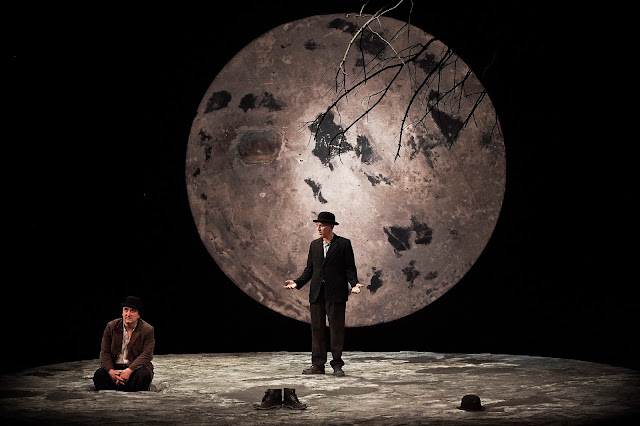 A spectacularly appropriate image from Beckett's masterpiece. Used via the Fair Use Act.


In 1949, playwright Samuel Beckett wrote one of the great masterpieces of the theater, "Waiting for Godot" and in so doing, essentially both created and defined for all time the "theater of the absurd".

During Godot, the two main characters (interrupted by a few nearly inconsequential, random characters who come and go) ruminate on all there - and about Godot himself, who, while entirely unknown, is expected by the characters to explain all when he arrives. Naturally, Godot never shows up.

The main characters' conversations are all at once meaningless and yet as surreal as they are, profoundly illuminate the human condition as they wait for the unexplained Godot, who never arrives (and no, Beckett did not mean "God" in the name Godot as he himself explained that in his original French version, the character would have otherwise had some variation of the french word for God, which is Dieu.

We see this same theater of the absurd played out among vitriolic atheists and the secular scientific mainstream in general.

The atheistic and secular science culture discuss and write with alternating concentrated, furrowed brows and gleeful, sparkling eyes about absolute absurdities, such as the fantasy semantics covered in another post on this site: they say there is no guiding intelligence to the manifestations in nature, and yet apply terms like "needed", "must have", "design" and the like to supposedly secular phenomena while often deriding God Himself as an "Invisible Man in the Sky". Truly absurd theater which would make Beckett's nimble surreal wordsmithery seem like a second grade reader about maintaining an operational bicycle.

Like Beckett's characters, the logic of mainstream science goes around and around in ever tightening circles like a pathetic figure with obsessive/compulsive disorder who cannot get out the door because his uncontrollable circular rituals are endless. For example, the scientific community once said that turkeys were warm blooded. But then if they were once dinosaurs, they must have been cold blooded, but if dinosaurs which supposedly led to turkeys were endothermic (warm blooded) then they must have been warm blooded - but that is not what some of the dinosaur structures show. This theater of the absurd culminated in a grand finale for this viewer while watching a show several years ago on the Discovery Channel which, in an effort to explain the paradoxes of evolution regarding the turkey, actually - believe it or not - had scientists communicating to the viewers that turkeys must have been warm blooded, then became cold-blooded for awhile then reverted to being warm-blooded again, all this without a shred of empirical evidence that such transitions ever actually took place - it was all hypothesis stated as immutable fact. Oh! Beckett would be green with envy!  Beckett slaps his head in the afterlife and intones, "Oh, warm-blooded-to-cold-blooded-to-warm-blooded! Why didn't I think of that?!"

And last but not least, atheists, particularly, demand that any scientific exploration entirely discount God in the scientific process, because "science and religion don't mix". I have news for the atheists; God is not defined by religion and should be taken into account as a possibility in any scientific discussion because God would exist entirely outside of any religious practice. If not a single person on earth worshiped Him, He would still exist. Since God is not defined by religion, He stands alone from the term and thus should very definitely be included as part of the hypothesis where knowledge otherwise fails.

This is not to say that science should stop looking for answers simply because something can be explained as the works of God. I am all for scientific exploration into the infinitely vast, the infinitely small and the infinitely complex, and so should all faith-based Christians, because, invariably, as the pattern always shows, when such things are understood, they clarify the existence of a Creator they otherwise take on Faith. My own feeling is that such illuminations in the human mind please God, and he puts a gold star on every deserving report.

Atheists, in Beckett's world, are plainly Waiting For Godot to explain all while doing Beckett one better in the absurdity department by appearing to think they already know it all, anyway. Christians are not waiting for Godot. They don't need him. They know God and know God is already here.

With so much empirical evidence of a Creator in things such as a billion unexplained instincts in 1.5 million species of life on earth, it may be that atheists claim God to be an Invisible Man simply because they, the atheists, simply have their eyes closed.

And such a state of being is truly absurd.

If you like what you see and read on CreationDino, please help us continue our work as well as additional installments of the video Behold Now Behemoth by giving a "Christian Payment Offering" for the dollar amount of your choice with the dropdown menu on the Paypal button on the upper right hand side of the screen for what you read and watch on CreationDino. We could really use the help right about now.